We have been providing optical services since 1987, initially in Kinnegad and Kilcock, and extended to Maynooth in 1994. The Kilcock branch was originally run in conjunction with a community Pharmacy and consolidated into the Maynooth branch in 2006.

The Maynooth practice has been expanded and renovated and opens Monday-Saturday with late opening on Thursday. The Kinnegad practice is located at Gildea’s Pharmacy , Main St, and operates Tue- Friday- call the Maynooth branch @ 01-6290370 for appointments. 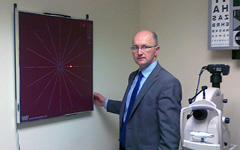